A SHORT HISTORY ON KIPLING BAPTIST CHURCH
​​​
“A small flower bloomed at the foot of the pines, in forest midst heather and moss, She almost was hidden by roots and by vines, Yet stood there so calm, like a rose.”
This was the song, sung by those brave, Christian-minded people of long ago. Kipling Baptist Church (as it is known today) began when some people from Sweden and Norway first arrived and settled around beautiful Deer Lake. It was the late 1800’s. At first there were two families; the Rosenes and the Westins. A short while later other families joined the circle. Soon they would be meeting together to worship God. The background of these first settlers was that of Baptist faith, and so began the makings of our Baptist church.
After five years of holding meetings in various homes, a decision to formalize themselves as a church was made. The first official meeting with minutes taken was held in 1901. Present were Mr. and Mrs. E Rosene and Mr. and Mrs. A Westin. Pastor Albin Anderson and wife led the meeting. It was conducted in the Scandinavian language. Soon many more people became interested and attended the regular church meetings. As people were saved and became interested in joining the church as members it became apparent it was time to affiliate themselves with a larger group of Baptists. The minutes of the church indicate that on May 26, 1902, Rev. H.L. Thomas of First Baptist in North Bay, came to organize the church here in Kipling. At that meeting six members of the church were baptized in the waters of Deer Lake. Afterwards a lunch was served. Later in the afternoon an organization service was conducted and in closing the ordinance of the Lord’s Supper was celebrated. The church was now officially known as, KIPLING SCANDINAVIAN CHURCH; affiliated with the Baptist Convention of Ontario and Quebec. (Today the convention is called Canadian Baptists of Ontario and Quebec).
Pastor Albin Anderson immediately began visiting neighbouring churches in Canada and the United States to canvas for help in erecting a church building. Through his efforts, six hundred dollars was raised. Mr Anderson donated four acres of land on which the church building was to be erected. On July 1, 1903, the first sod-turning ceremony was conducted. In time a sturdy log church was seen from the shores of Deer Lake. Services were held regularly in the new building, which included Sunday School. This same building would serve as a public school for a number of years; Mr. Thomas Kraby being the first School Teacher in charge.
After the departure of Mr. Anderson, Mr G.T. Johanson led the congregation until February 6, 1910. At that time Rev. Gust Engstrom came with his family and served the community as pastor, counsellor, doctor, and undertaker until retiring twenty-five years later. In 1936, Rev. And Mrs. Axel Fugelsang arrived and served for five years. He would be instrumental in supervising the building of a new church to replace the old log structure.
Over the years there have been many short-term pastors, lay-pastors and summer-students who have given spiritual care to the faithful people of Kipling Baptist Church. In October 2010, Reverend Stephen Olmstead accepted the invitation to come to Deer Lake and pastor the wonderful people who attend from the communities of Warren, St. Charles, Verner, Kipling Township and River Valley. 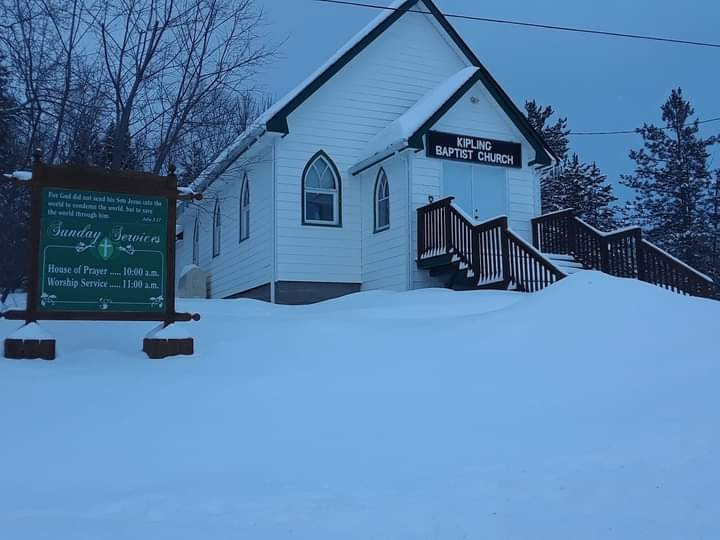